THE downside of market timing - missing out!

Trying to avoid a bear market can come at a very steep price: missing out on further gains if you get it wrong

Trying to avoid a bear market can come at a very steep price: missing out on further gains if you get it wrong. Market timing can be a costly mistake since correctly timing the market is virtually impossible. The potential mistakes are just as severe whether you are trying to time the market to sell high or buy low. Because of this, investors who are troubled by the current state of the stock market may want to take a long term view and hold tight. 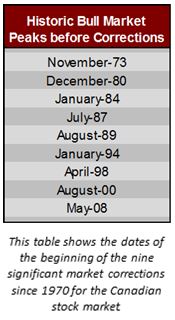 A bear market is typically defined as a 20% drop from a market peak, or twice as severe as the threshold for a correction which is just a 10% decline. The last year of a rally is sometimes referred to as a “melt-up” or a move higher that is driven by investors being fearful of missing out on past gains. The final years of a bull market are usually the best years of the economic cycle and staging an early exit from stocks to avoid a coming downturn can be a damaging long term mistake. In particular, equities tend to see steep gains in the 12 months before the start of a bear market. Double digit gains have historically been seen in the year leading up to a bear market, as the gains in the last year of a bull market make for a much more pronounced rally than is seen earlier in the cycle. There have been nine significant market corrections since 1970 (using the Canadian stock market as the reference, see the dates of the market peak on the left). The chart to the right shows the asset class returns late in a bull market for various periods prior to the various security types reaching their apex. 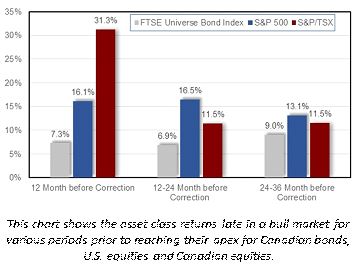 The penultimate year of a bull market has seen a 31.3% gain for Canadian stocks on average, which on its own would more than compensate for the pending market correction. More importantly this level of return confirms the fact that typically Canadian stocks are very much late cycle stocks and their performance dwarfs what is achieved elsewhere. For example, U.S. stocks “only” averaged 16.1% in the year before the stock market correction occurred, while bonds eked out 7.3% over the same time span. Comparatively, in the year before that and the two years before the peaks (meaning the period that is between 24 and 36 months before the start of the bear market), U.S. stocks were clearly the better overall investment. This sounds very familiar to what has been occurring over the much of this economic cycle. Should this 40-plus year pattern continue and if the current market uptrend is winding itself closer to a market correction or a bear market, it is possible that Canadian stocks could make up much of their relative underperformance versus U.S. stocks over the past few years.

Certainly, the concerns that stock markets could be looking at weak future results, if not necessarily a bear market, have been growing. However, stocks are not seen as overly expensive right now and the first quarter earnings season has been strong, although the market’s reaction to them suggests investors have not been impressed. The final stages of a bull market can be lucrative for investors and an early exit can be detrimental to an investor’s long term results. Current economic data supports the case for continued economic recovery and further stock market gains. Despite what could happen in the coming years, the best course for most investors is to stay put, getting the benefit of compound growth and not making short term trading decisions. 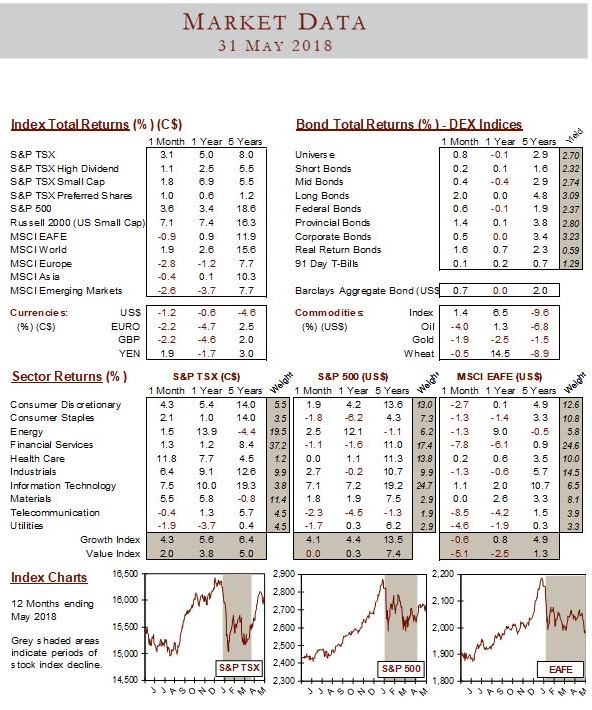 Banks have to change because customers have changed

Why investors should welcome new CEOs with big pay cheques

Are you embracing the third wave of financial planning?