The difference in performance between Canadian and U.S. stocks has been pronounced over the past few years in favour of U.S. stocks but that could be about to change

The difference in performance between Canadian and U.S. stocks has been pronounced over the past few years in favour of U.S. stocks but that could be about to change. The U.S. is considered to be a growth stock market while Canada is deep value, which is known to perform well during the late stages of an economic cycle. Canada is relatively commodity price sensitive which means the Canadian market is an effective hedge against inflationary pressures.  As such, Canada almost always outperforms the U.S. late in the investment cycle. Considering the current discrepancy in stock market valuations and equity risk premiums, the case for choosing Canadian stocks is compelling. 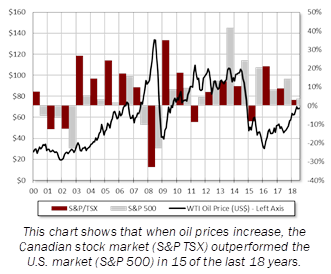 In fact, Canadian stocks frequently rise as the U.S. market declines or heads into recession as happened from August 2007 to August 2008 when the S&P/TSX index rose 3.5% while the S&P 500 was down 10.7% (all figures in Canadian dollar terms). The reason for this can be summed up in one word: oil. Oil prices surged 56% during that period which allowed the Canadian energy sector to advance 16%. The same thing happened in 2005, when the S&P 500 was only up 1.6% for the year, while the S&P/TSX rose more than 24.1%. Again, oil prices surged 37.7% and the Canadian energy space jumped 45%.
These are not isolated instances but rather highly correlated recurring events. When oil prices increase the Canadian stock market outperforms U.S. stocks; when oil prices decline, the Canadian stock market lags U.S. stocks. This is not the case in most other stock markets since none of them currently have over 20% of their stock weighting in the energy sector like Canada (which was 30% in 2008 when oil prices reached its peak). For most of the rest of the worlds major stock markets the Energy sectors peaked at 12% weighting versus a relatively meager 6% today.

The relationship between stock markets and oil is volatile with the correlation between the returns for stocks and oil prices swinging between positive and negative values depending upon the time period used. However, the correlation is very positive for Canadian stocks versus U.S. stocks over longer time periods.
The chart on the right and the data to the left clearly show that on an annual basis, when oil prices increase, the Canadian stock market does better that the U.S. stock market. In fact this pattern occurs 77% of the time. Over the past 18 years this relationship has only broken down 3 times: 2011, 2013 and last year, 2017. Even in those three instances, only once was the annual return of the Canadian market lower than its long term average and in the other two instances, the U.S. stock market produced abnormally large returns, 27.9% on average.
When it comes to the relationship between oil and stock pricing, normally a moderate correlation does exist. However, when it comes to different markets and their underlying core components the price movement in oil can have a highly cyclical and significant impact on results. It is crucial to keep this relationship in perspective as during this current period of late cycle U.S. market conditions the Canadian energy sector and Canadian stocks in general have traditionally been among the best places to hide. 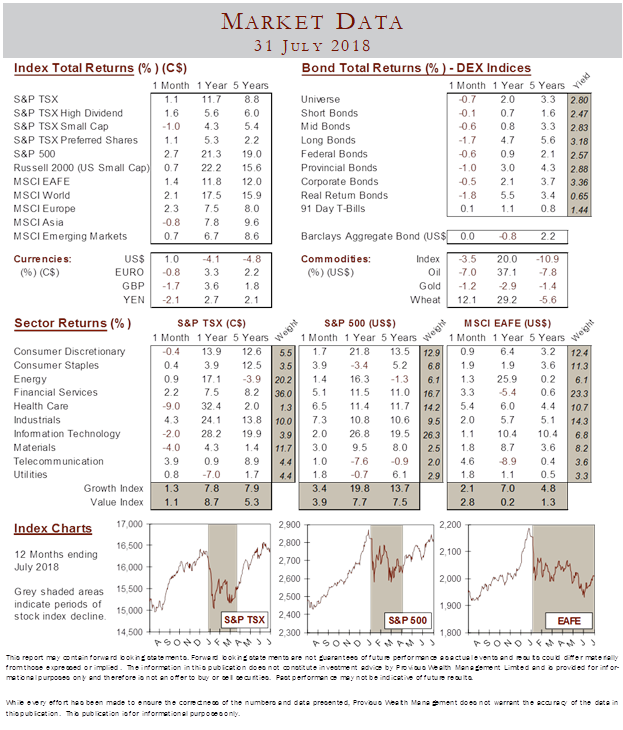