Remembering the sentiment back in December 2009, not many investors were thinking that the next decade was going to be particularly prosperous for the world’s stock markets

Remembering the sentiment back in December 2009, not many investors were thinking that the next decade was going to be particularly prosperous for the world’s stock markets. This was understandable as most investors were still licking their wounds from the pain that was inflicted by the Financial Crisis of 2008. That crisis had led to the worst stock bear market since the Great Depression. In truth, most investors were still wondering whether the crisis had even come to an end. Of course with hindsight being perfect, the markets had bottomed in February 2009 and the world’s economy emerged from recession in June 2009.

The reality was that most investors in Canadian securities did pretty well in the first decade of this century despite the 2008 market sell-off. Canadian stocks generated an average annual return of 7.7% per year, while bonds gained 6.7% per year. Even cash produced average annual returns of 3.2% per year (which is very respectable by today’s standards). The same cannot be said for U.S. and International stocks which declined 3.3% and 0.1% respectively (all figures are in Canadian dollar terms) for the decade ending 2009. 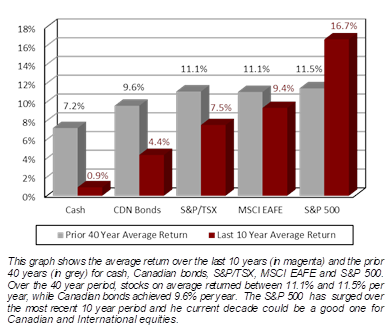 Remarkably, the average annual returns in Canadian dollar terms for stocks around the world were very similar for the 40 years between 1970 and 2009. Even Canadian bonds were not that far off, as well. As the chart to the right shows, the S&P/TSX, MSCI EAFE and S&P 500, on average returned between 11.1% and 11.5% per year. Canadian bonds achieved 9.6% per year. With those sorts of numbers most investors would have been relatively indifferent as to where they invested their money.

So, when trying to forecast the subsequent decade (i.e. 2010 to 2019) it might have made sense to think against the prevailing gloomy sentiment and believe there would be a greater likelihood for good returns given the stock market’s strong historic tendency to regress to the mean. Historically, particularly good decades are often followed by mediocre (or worse) ones and vice versa (this is particularly evident from U.S. stock data dating back to 1871 which shows a statistically significant inverse relationship between returns over the trailing 10 year returns and over the subsequent 10 years). 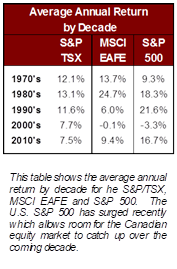 Clearly, the U.S. stock market reacted true to form surging to an average annual return of 16.7% per year in the 2010’s after an abysmal 2000’s. International stocks bounced back somewhat and achieved acceptable results. Meanwhile, the Canadian market had an atrocious decade on a relative return basis. So, from an educated guess based on past experience, the next decade should mean that investors need to brace for mediocre U.S. stock market returns. Therefore it shouldn’t come as a big surprise that this decade should be a good one for Canadian and International equities.

In the case of bonds, regression to the mean provides less of a guide to their performance over the coming decade since their returns are largely a function of their starting yields. Since current yields are within shouting distance of what they were yielding in December 2009, that bodes ill for them over the next decade.

While this walk down memory lane should be seen as optimistic for Canadian stocks over the next decade, it should be remembered that history seldom repeats itself exactly. However, even if history does not repeat itself exactly, more often than not, it does rhyme which would be very nice tune for Canadian investors. 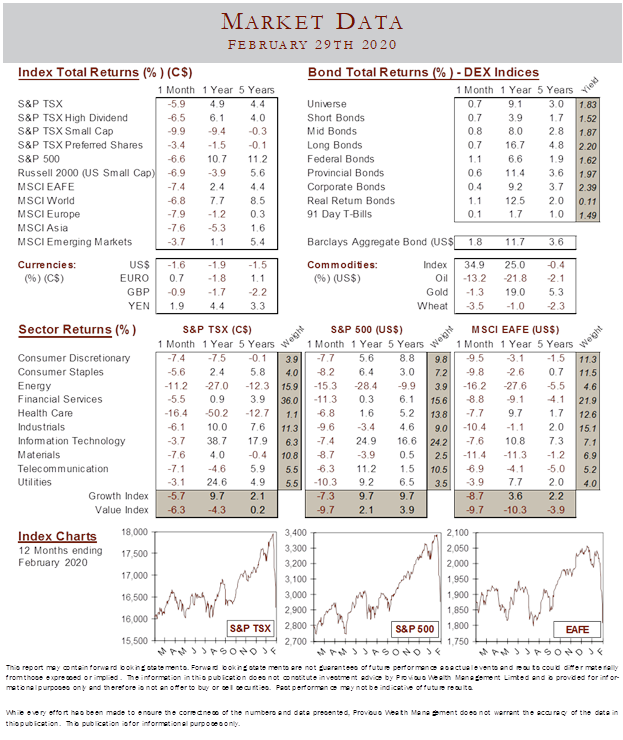 Now you are in your retirees’ shoes