While accurate and transparent reporting is essential for financial advisors, academics have found that how performance is expressed can make a big difference to client satisfaction.

Specifically, using round numbers has a positive impact on satisfaction according to researchers at Washington State University.

"Most people have a preference for round numbers," said Kunter Gunasti, an assistant professor of marketing and international business at WSU's Carson College of Business. "Hitting a round number makes us feel more complete. This happens when we're taking tests, getting paid, leaving tips or pumping gas."

The study’s authors say that most people would get more of a buzz from receiving a payment as $2,000 Canadian dollars rather than the US equivalent of around $1,521.

But it’s not about the size of the number, as Gunasti says being told we’ve lost 10 kilograms can be more satisfying than the equivalent in pounds of 22.

The satisfaction boost for a goal, perhaps an increase in savings or investment returns, is most pronounced when it is distant.

The researchers found that the satisfaction gained from round numbers worked across several experiments including income targets, video game achievement, and using loyalty programs.

For example, those working towards an income goal were more satisfied when their wages were expressed in round numbers.

Manipulation
The downside to this preference for round numbers is that we can be manipulated by marketers.

For investors this can mean that they are swayed by figures that have been structured to look the most impressive.

"Don't be a slave to the decimal system," he said. "Numbers are symbolic representations that can be easily manipulated,” warns Gunasti. 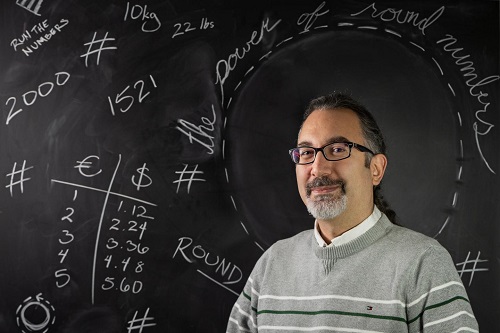