Is Canada’s workforce facing an ‘AI-mageddon’?

The robots are coming and millions will lose their jobs. We’ve seen the scary headlines but things may not be so bleak.

According to a new essay series from the Fraser Institute, the adoption of burgeoning tech such as automation, artificial intelligence, and robotization, will not lead to mass job losses.

“While some believe the rise of artificial intelligence and other technologies will lead to massive unemployment, the effect will likely resemble past experiences with other new technologies—new jobs will emerge as businesses and workers adapt,” said Steven Globerman, Fraser Institute senior fellow, contributing editor and author of the essay Artificial Intelligence and Employment: Will History Repeat?

A recent survey from Wells Fargo found that, even as technology finds a greater place in financial services, human advisors will still be demanded by clients.

Art Carden, associate professor of economics at Samford University, draws on historical evidence of how past waves of new technology destroyed some jobs but created many more new jobs that ultimately enriched society.

“While automation, artificial intelligence and robotization will eliminate or change the nature of some jobs, these technologies will also create many new jobs at a time when demographic change will reduce the labour force as a share of the population,” Globerman said.

Those who disagree include Andy Haldane, chief economist of the Bank of England, who said last year that this fourth industrial revolution will be far more costly for the workforce than those in the 18th and 20th centuries. He said the rise of AI would have a “dark” fallout.

Impact of retiring workers
A third essay in the series addresses the impact of Baby Boomers reaching retirement with a resulting shrinkage of Canada’s labour force, mitigating losses from technology.

“The growth of technology combined with a shrinking labour force may actually produce a shortage of qualified workers in Canada, rather than the widespread unemployment predicted by doomsayers,” said Livio Di Matteo, Fraser Institute senior fellow and author of the essay Demographics, Technological Change, Participation Rates and Canada’s Future Labour Shortage. 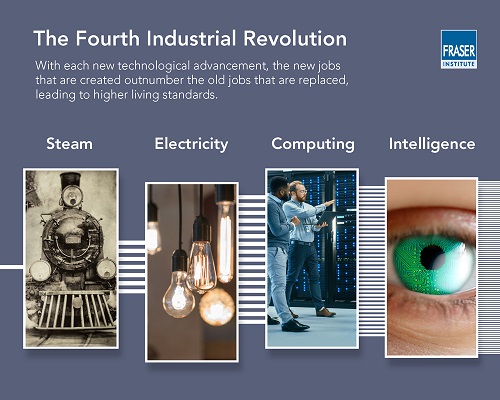