For every $1 Canadian men are paid, women get 84 cents

There has been some improvement in the gender pay gap around the world but Canada still lags nations including Australia, France, and Singapore.

A global Glassdoor study reveals that Canadian women earn 84 cents compared to the $1 that men earn, a 16.1% pay gap.

That’s on an unadjusted basis and applying statistical controls for a more ‘apples-to-apples’ comparison – including age, experience, education, company, and job title - narrows the gap to 4% or 96 cents paid to women for every $1 paid to men.

How Canada compares to the US

With ongoing concern about Canada’s ability to be competitive with the United States, the Glassdoor study reveals that women have a fairer deal in Canada.

“Over the past three years, company leaders, politicians, celebrities and more have called for an end to the gender pay gap. Glassdoor’s comprehensive study put those words to the test to reveal that slight progress has been made to close the gap. Though a promising sign, it should not detract from the larger fact that significant pay gaps remain around the world, even after controlling for workplace and job factors,” said Glassdoor Chief Economist Dr. Andrew Chamberlain. 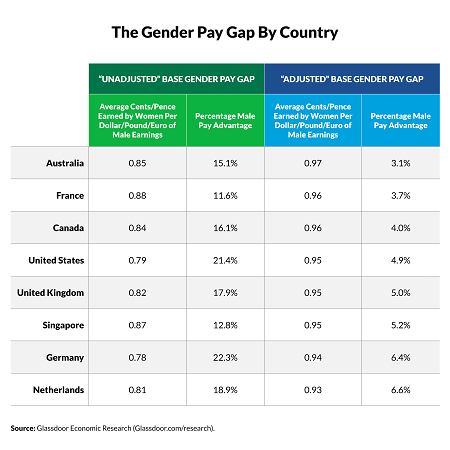 The global study also looked at how men and women differ when applying for jobs.

The study shows that men applied to jobs with base salaries that are, on average, $13,635 higher, or a gap of 18.3%, mostly due to the same occupational sorting differences that were also found to be a leading contributor to the overall gender pay gap.