From a financial crisis to an oil shock and now the Brexit fallout, if Canada’s economy, and indeed most of the West, is characterised by anything nowadays, it’s a propensity to disappoint. It’s not surprising then that more and more investors are looking towards emerging markets.

Bhim Asdhir is CEO and founder of Excel Funds, which is dedicated to bringing greater investment to nations with the most growth potential. At the moment, that means India in particular – currently experiencing a growth rate of 7.5 per cent. Born in New Delhi, Asdhir and his family moved to Canada in 1980 and he later went on to launch Excel Funds in 1998. The country of his birth has never left his mind, however, and especially now that’s its economy presents such investment opportunities.

“There has been massive changes since I left,” he says. “The house I was born in was worth $5,000 in 1980. Today it’s worth $5 million. India has come a long way, but there are a lot of opportunities to come, so we don’t want Canadian investors to miss out.”

Canadian investors have developed a reputation for an engrained home bias over the years. It’s a stigma that Excel Funds is striving to change.

“I’ve been doing this for 18 years and Canadian investors are becoming more open to emerging markets,” says Asdhir.  “They realise that’s where growth is. Around 75 per cent of global growth is coming from emerging markets, and India is a shining star. A new government came in two years ago and I think that was a turning point.”

India’s emergence as a global power is similar to that already experienced in China. Now that the Chinese economy has slowed, India is primed to take its place as the global pacesetter, according to Asdhir.

It’s an opportunity that investors here are well aware of, but Excel Funds are keen to spread the message even further. For that reason it will travel with a special delegation to the sub-continent in November, having held two similar trips last year.

The main point for foreign investors often concerns good governance. In that respect, India has come a long way from the land blighted by political instability and violence for so long.

“In my mind, India should be looked as before and after Modi,” says Asdhir. “India has a large IT industry and he is using technology to make things transparent. He has opened 210 million new bank accounts, predominantly for poor people. Subsidies go directly into their bank accounts, and that’s a big difference. He is making a much more level playing field and there has been no corruption in the last two years.”

That last point is crucial and meant that India had its highest ever foreign direct investment last year. Asdhir identifies how this is only the thin end of the wedge as far as India’s potential goes.

“Penetration for automobiles in India is about two per cent – in Canada it is 62 per cent,” he says. “But even at two per cent they have more cars, 27 million there and 22 million here. Soon it will be three percent or four, and that process will take on a life of its own. It is happening with many different sectors and services too. It’s just a matter of time for India to reach the $10 trillion mark.” 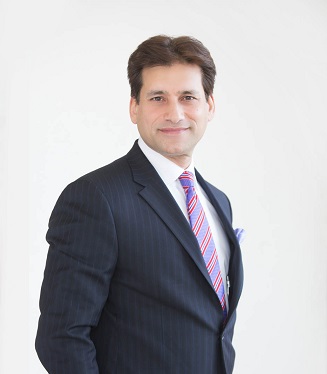