That’s the finding of a study by the Fraser Institute which has added to the growing chorus of voices calling for a fairer tax system to boost Canadian competitiveness.

“Income taxes are a major attractant—or deterrent—for entrepreneurs, businesses and workers looking to start a business, expand operations or relocate, and at virtually every level of income, Canada’s tax rates are uncompetitive with the US,” said Robert P. Murphy, Fraser Institute senior fellow and co-author of Canada’s Rising Personal Tax Rates and Falling Tax Competitiveness.

How the taxes stack up
At C$50,000 of income: Among all 61 provinces and states in Canada and the US, the highest combined personal income tax rates are in the 10 Canadian provinces, from a high of 37.12% in Quebec to 28.20% in British Columbia.

The rates of course are only part of the equation and many Canadian jurisdictions set the thresholds for each tax band lower than their American counterparts.

So, for example someone with income over C$200,000 in Ontario would pay the province’s combined top tax rate of 53.53% whereas paying the top rate in New York – already lower at 45.82% - would not kick in until income was over U$1 million. 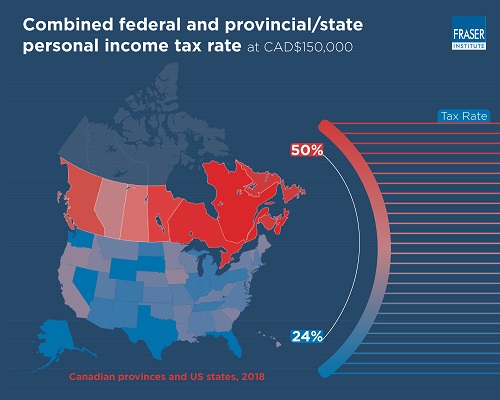