Canadians are investing more abroad but inward FDI is down

More needs to be done to attract foreign direct investment into Canada to boost productivity and prosperity.

Business leaders have been calling for tax changes to encourage greater investment in Canada and now a new study by Fraser Institute senior fellow John Globerman says that the value of Canadians’ investments abroad has increased by 73% since 2013 but inward investment has fallen in that time by 55%.

“Investment by foreign companies and individuals is vital to increasing productivity and improving living standards for Canadian workers, so when the level of investment drops, Canadians suffer,” said Globerman, author of ‘Canadian Foreign Direct Investment: Recent Patterns and Interpretation.’

During the period from 1990 to 2014, the average annual investment in Canada by foreigners as a percentage of GDP was higher than that in the United States and the OECD.

But from 2014-2017 the US and OECD saw FDI increase to outpace Canada, while outward FDI from Canada increased.

“When you see less money coming in from foreigners at the same time Canadians are increasingly investing abroad, it’s a strong indication that Canada is not a good place to invest,” Globerman said. “Unfortunately for Canadian workers, Canada has become a less attractive location for direct foreign investment.”

Canadian investors continue to seek investments in the US but are also increasingly viewing emerging markets and Europe for returns. 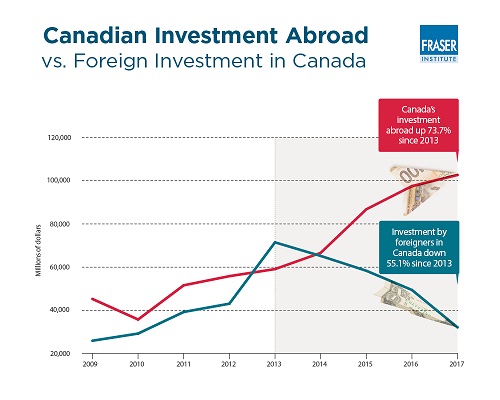 Why advisor is trying to net more professional hockey players