As bond yields bounce up and down, investors need to be at the front of the curve, says Franklin Bissett Investment Management portfolio manager

This article was provided by Franklin Templeton.

Nowhere to run to, nowhere to hide – that could be the description of the 2022 investor year. It has been a difficult 2022, and many investors are looking to enhance their cash positions while preserving capital, given market volatility and rising interest rates. In this environment of high inflation, higher rates, and slow economic growth, an ultra-short duration bond strategy could be timely.

The major equity and bond markets have been hit hard this year by geopolitical shocks, fallout from the COVID-19 pandemic, and sluggish growth. Rapid and aggressive moves by major central banks to increase interest rates resulted in a flat or inverted bond yield curve and contributed to elevated market volatility. An inverted yield curve means that interest rates on short-term bonds are higher than those of long-term bonds. For instance, on December 2, 2022, the yield on the three-month Government of Canada bond was around 4.08%, while the yield on the 10-year Government of Canada bond was 2.84%.

An inverted yield curve is often seen as a pessimistic market signal about the prospects for the wider economy in the near term. Bond markets have priced in even more interest rate hikes from central banks like the Bank of Canada and the U.S. Federal Reserve.

So, rather than thinking about being ‘ahead of the curve’, it may be time for investors to be at the front of the curve.

These challenging market conditions are ideal for an ultra-short duration bond strategy. Duration is a number that’s used to measure how sensitive a bond’s price is to changes in interest rates – how much the price is likely to change as rates change. The longer the duration, the greater the sensitivity to shifts in interest rates for a bond. Understanding the use of duration can help an investor determine the position of bonds in a portfolio.

At the front end of the federal government bond yield curve, opportunities are available for investors because the curve remains flat in the middle and at the back end. A yield comparison of the Canadian market as of October 31, 2022, showed that an ultra-short duration strategy outperformed three-month Treasury bills and was competitive with one-year to three-year government bonds. Because short-term yields are less sensitive to rate hikes, they can be more protected and stable, plus they are not as exposed to potential drawdowns like those seen in strategies with longer-term exposures. 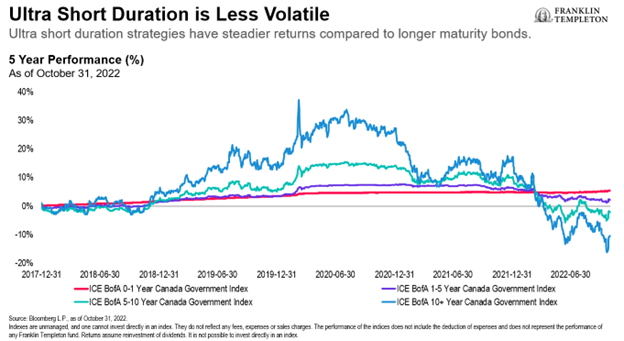 Franklin Bissett Ultra Short Bond Active ETF (TSX: FHIS) is a new ETF strategy that looks for opportunities at the short end of the bond yield curve, among bonds that mature over the shortest periods. FHIS is designed to significantly reduce risk if interest rates increase, while providing an attractive yield. About 47% of the portfolio is invested in short-term money market paper 1, such as Bankers Acceptance notes, which offers a substantial degree of stability and protection of capital from rate upswings. The investment team uses Bankers Acceptance notes to boost the yield of the portfolio with little risk.

Overall, the portfolio’s average duration is approximately 0.65 years1 – right at the front of the yield curve. The market opportunity is quite substantial in the short term, where this ETF is focused.

As for portfolio construction, the core element is made up primarily of Canadian corporate bonds, which create a solid foundation. These bonds mature on a schedule that roughly matches the peak in the short end of the rate curve. The core securities provide some of the highest yields in the market while having an ultra-short duration.

The non-core segment aims to tap opportunities in foreign debt markets, derivatives and high yield markets to try to increase the risk-adjusted returns of FHIS. The non-core strategy seeks to diversify the portfolio; it’s not intended to increase the overall risk of this actively managed ETF.

Our main job will be to always offer a compelling yield to investors despite what’s going on in the markets. We aim to generate a yield that’s comparable to that of GICs, but with no lock-in periods.

Find it at the front end

FHIS was listed on the TSX on September 12, 2022, and is designed to take full advantage of opportunities at the shortest end of the yield curve (primarily 0 to 2 years). This ETF offers:

All this, and more, for a competitive management fee of 15 basis points.

In a challenging investing year, an ultra-short bond strategy is a timely alternative for investors looking for stable income with downside protection and limited sensitivity to movements in interest rates.

Brian has over 21 years of experience in the financial services industry. He joined Franklin Templeton in 2001 as a portfolio accountant. He holds a Bachelor of Arts degree in economics from the University of Calgary. He is a Chartered Investment Manager (CIM).

This material is intended to be of general interest only and should not be construed as individual investment advice or a recommendation or solicitation to buy, sell or hold any security or to adopt any investment strategy. It does not constitute legal or tax advice.

The views expressed are those of the investment manager and the comments, opinions and analyses are rendered as at publication date and may change without notice. The information provided in this material is not intended as a complete analysis of every material fact regarding any country, region or market.

Commissions, trailing commissions, management fees, brokerage fees and expenses may be associated with investments in mutual funds and ETFs. Please read the prospectus and fund fact/ETF facts document before investing. Mutual funds and ETFs are not guaranteed. Their values change frequently. Past performance may not be repeated.